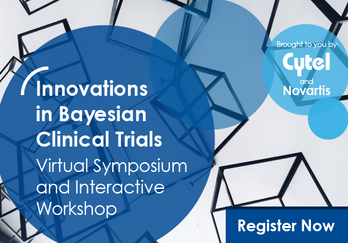 Cytel and Novartis are together hosting a complimentary Bayesian Virtual Symposium and an Interactive 7-part workshop. This series will expose you to cutting edge topics from industry renowned leaders in Bayesian statistics. The introductory webinar “Bayesian Statistics and FDA Regulatory Acceptability” is presented by Greg Campbell, PhD, Former Director of Biostatistics, U.S. Food and Drug Administration.

In the United States Bayesian statistics has been used in regulatory submissions to the Food and Drug Administration (FDA) for confirmatory clinical trials medical devices for more than fifteen years. In this webinar, Dr. Campbell reviews the Bayesian history and accomplishments for medical devices. He talks about the status and opportunities of Bayesian statistics for pharmaceutical drugs and biologicals. We also learn about the challenges and the future of Bayesian statistics in the regulatory environment. You can access the on demand webinar and register for the rest of the series by clicking the button.

The Bayes Theorem was published posthumously in 1763 by Rev. Thomas Bayes, an English minister. This webinar focuses on Bayesian statistics; θ (theta) is used to represent an unknown parameter. It could be, for example, a treatment effect or the success of a patient with the new therapy, and the probability of θ then, is its prior distribution. We then observe some data and P(x|θ) is called the likelihood function (also written as L(x|θ)). This is what one would use if you knew what θ was; you could calculate the probability distribution of the data given the particular value of θ. Bayes Theorem tells you how to update your prior to get the posterior distribution.

As presented in the glossary of ICH E-9, Bayesian approaches are ones that provide a posterior probability distribution for some parameter (e.g., treatment effect), derived from the observed data and a prior probability distribution for the parameter. The posterior distribution is then used as the basis for statistical inference. In contrast, the Frequentist methods are Statistical methods, such as significance tests and confidence intervals, which can be interpreted in terms of the frequency of certain outcomes occurring in hypothetical repeated realizations of the same experimental situation.

The ICH Bayesian Statistics statement in ICH E-9 admits that although ICH E-9 is written primarily from a Frequentist Statistical standpoint, it should not be taken to imply that other approaches are not appropriate. The Bayesian approach may be considered when the reasons for their use are clear and the resulting conclusions are sufficiently robust. In the US, there are laws and regulations that govern the US Food and Drug Administration. But those laws and regulations do not provide any guidance about statistical philosophy, whether it is Bayesian or frequentist. So, there is no mention in the regulations about confidence intervals, p-values or the specified level of Type I error probability of, say, 0.05 and of course nothing about Bayesian statistics either.

The Bayesian Thinking and Statistical Philosophy

Why Bayesian for Medical Devices?

Unlike the drug situation, mechanism of action for many medical devices is well understood. The effect tends to be localized rather than systemic and is physical not pharmacokinetic. Additionally, whereas drugs are discovered and basically don’t change at all, devices evolve and are constantly changing. The average life length of a device is one to two years as they are constantly being improved. So, there is often a great deal of prior information for devices based on the previous versions of the device.

Also, in the years preceding 1998, there was a lot of work that had been done using Markov Chain Monte Carlo (MCMC) computation and with much faster computers to enable the calculation of the posterior distribution for any prior. Up until that point, the exercise of Bayesians was highly theoretical. It depended on particular conjugate priors and there was concern about how realistic the Bayesian statistics was. The innovations in MCMC and computational speed enabled that all to be swept away and it became feasible to calculate posterior distribution for any prior.

The FDA Guidance for the use of Bayesian statistics in medical devices clinical trials was finalized on February 5, 2010. The emphasis in the guidance document is on priors based on quantitative data. Bayesian statistics can be used with Subjective priors. One of the challenges for the FDA was how to agree on what the quantitative information was. The emphasis there was to make sure that usually there were patient level data on prior studies that was available, and then it was legally accessible by a company that already uses it. Subjective priors can be based on all kinds of information. The problem the FDA had was to be able to evaluate prior within FDA without using other proprietary information, which is difficult. Also, prior elicitation can be difficult and time consuming. For all these reasons, the idea was to focus only on quantitative data and then there would be no worry about robustness to priors.

In the guidance document, there are two main approaches. One is to leverage data from one or more prior studies using Bayesian Hierarchical Modeling or power priors. The second approach is to use Bayesian Adaptive designs, usually with noninformative priors. Usually these designs are Bayesian group sequential and the big advantage is to be able to model the primary outcome in terms of intermediate endpoints. Dr. Campbell explains these two approaches in details, within a study. Click the button to access the on demand webinar and learn about Bayesian Hierarchical Modeling and Bayesian Adaptive designs.

Other Uses of Bayesian Statistics

Within any drug or medical devices company, Bayesian statistics can be used with lots of subjective priors to make all kinds of internal decisions. One of the other advantages of a Bayesian approach is that you can calculate the probability of success. This is also particularly helpful for Data Monitoring Committees; when the design is not Bayesian, the notion of finding out how likely it is that the trial will succeed can prove to be very helpful. With Bayesian Statistics, you can use meta-analysis to combine across studies for a global conclusion as opposed to using information from prior studies to incorporate into a decision about a new study.