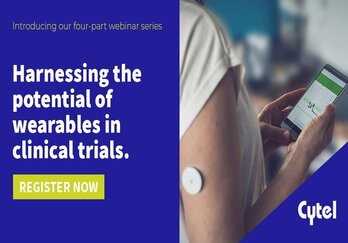 With wearables likely to become a regular part of clinical trial design, statisticians could benefit by familiarizing themselves with exactly what they measure, and how the data they collect is processed. Unlike traditional clinical trials, wearables generate incredible levels of raw data, and translating them into processed data that is clinically meaningful can become a challenge.
Case Study: The Accelerometer

In a recent webinar presented by Cytel, Professor Ciprian Crainiceanu of Johns Hopkins University explained the inner workings of one of the most commonly used wearables - The Accelerometer.

Accelerometers contain a small box with an even smaller metal ball suspended in the middle by an electric field. As the accelerometer is moved, the inertia of the ball causes it to move around the box, and when it moves close to one of the walls, an electric charge is created. These charges are then recorded by the Accelerometer in acceleration units (m/s2 or Gs, where G equals the gravitational pull of the earth), and because people move in three dimensions, acceleration is measured on the X, Y, and Z axes simultaneously.

All accelerometers use this technology to capture large amounts of raw data. What varies from device to device is the software used to process the data, and how it is then presented to the end user. In other words, devices may express activity with a daily step count, activity counts or activity intensity, but irrespective of the method used, they all draw on raw acceleration data across the axes mentioned above.

The Challenge for Biostatisticians

The good news for biostatisticians is that wearables like the accelerometer, produce an array of data,-- far more data than has ever been available before,-- and this allows the potential for a more meaningful quantification compared to what has been previously possible. The quantitative processes for converting raw data to meaningful insights requires collaborating with a new statistical skill set for many sponsors.

Watch the on demand webinar to see some examples of wearable technology, including the accelerometer, used to capture data for clinical and epidemiological studies.